My old doggy died over the weekend - I am devastated

She used to come with me everywhere, I am lost without her.

I was thinking how lovely it would have been (too late now) to have had a paw print captured in glass.

I've looked on the internet but can't find info on this. I envisage a paw print floating in some clear glass but as usual I don't know where to start to learn.
It could even look great capturing paw prints on some flat glass...

Has anyone info on this?

by Lynn g
So sorry for your loss...it's really hard to lose our beloved pets.

A couple of ideas...non-toxic glass paint (perhaps Glassline, which is water-based and can go to full fuse) used on the paw to stamp prints. This could be clear-capped and fired, or could be enclosed within multiple layers of clear to make a thick tile or paperweight. You could also use clay or dental mold-making goop to create a casting mold of the paw pad, which could then be incorporated in a casting.

Another idea...I did a stepping stone portrait of a friend's dog...glass pieces set in concrete (see the
Tiffany Garden book) using a photo of her dog. You could use a similar technique to fuse a plate.

by theanimallover
Thanks. It is hard, I knew this moment would have to come, but I still wasn't ready for it...
We were together most of the time as I mainly work from home- she used to make me laugh as when my other half got up early to go to work she would nip in the bed under the covers and I'd wake up with a funny face on the pillow next to mine!!

Thanks for sharing your ideas. I think the glassline could look good - but not very practical - I was hoping to catch dog and perhaps wild animal prints! I was going to do my friends dog - I'd have to really get the paint off or I'd be in trouble!

Clay or dental mold sounds good, how could that be incorporated? I guess in my mind I was thinking of catching the paw in clay, but somehow using wax which would burn out, but I guess that wouldn't work with glass as the hole would just get filled.

I've just googled Tiffany Garden book - I did have this book years ago. I remember I made a ginger cat over 10 years ago, which nobody commented on, then one day a delivery man came round and said that he loved it and where did i get it from - so I gave it to him - he was really pleased.

by AndyT
Make a bisque mold and have a dog step in the clay. Fire. then make a reverse mold. fire. then slump the glass on the reverse mold.

by bob proulx
Being a dog owner and lover I feel for your loss. I do a lot of pet memorials in glass and this may help you trough your loss and help remember your friend why not burn her picture in glass.
So sorry for your loss>
Bob

by Mike Jordan
We've lost a number of our Bouviers over the years and just lost a 15 year old a month ago. What I did was take a block of Sculpey clay and worked it until it was soft and patted it out into a round cow patty shape. Then I'd take one of the dogs feet and press it down into the clay to make a deep impression. Of course they thought I was nuts. I got better impressions on those dogs that had their toenails clipped back as the ones that weren't left holes in front of the pad area where the nails poked into the clay. I then baked the impression so it would be permanent, dated and put the dog's name on them. What I am going to do one of these days is use R&R 910, Hydroperm or something else like that and make a casting of the impressions and then use that to do a glass cast out of. My only regret is that on some of the earlier ones I did, I didn't make the clay blank a nice uniform shape so I've ended up with what looks like a glob of clay smashed down to about a half inch thick. The later ones I did I made them nice neat round blanks. Regular mud clay will also work and can be made softer by adding some water. I've got a 25 pound slab of clay and have been thinking of rolling it out into a frame and then have several of our current group of Bouviers step in it, then bisque fire it and use it to slump a sheet of glass over.

Good luck coming up with something that you can keep along with the other memories.

by theanimallover
Thanks, sorry to here about your dog too Mike. It's too late for me to do this for my dog - so I am doing for a friend. It's something I have often thought of doing. I have some wonderful photos of my dog - perhaps hundreds in fact! Here is one my son took some time ago

So if I bought some clay would I need to fire in a potters kiln, I do know some potters but they are quite far away - but it's doable! Interesting that toenails cause a few problems! I have no idea what a R&R 910, Hydroperm is!

Andy do you mean roll out some clay, get the dog to step on it, let it try then lay some clay over the first piece then fire?

What about using 'lost wax' has anyone done that? I googled it yesterday, and saw some interesting pieces with human feet etc.

by Haydo
I can relate also. I'm so grateful now that my old lab "Rajah" dragged his tired old dogs body up the full length of a freshly dumped load of excess cement from a job up the road that went wrong to make a wonderful rustic path beside my home. Every time i get around to clearing it, the prints are revealed and make me so happy for the memories. peace, haydo

by theanimallover
That's so funny, and lovely.

by Mike Jordan
That's a cute noise. Nice and big too.

Yea, I've got a few photos of our dogs too (I won't go into how many thousands of them I have

). Most of ours have become service dogs (Bouviers are naturals but usually not thought of because of their long hair). Here are 3 of our Bouviers with the 2 on the left being service dogs for my wife. The picture shows one of the things they like doing to have fun and it's functional too. 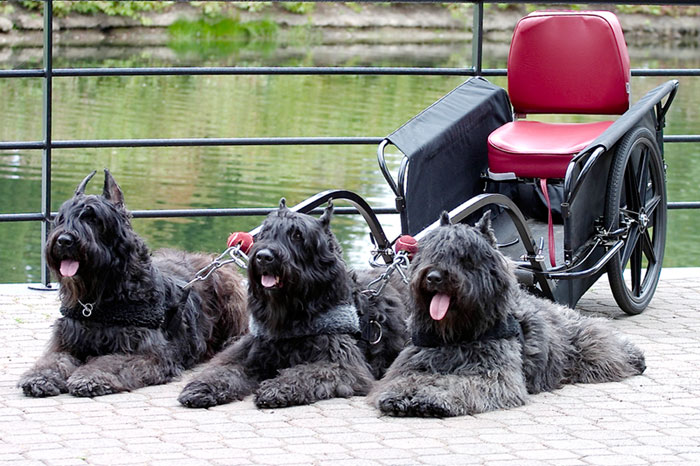 What I mean by rolling out a slab of clay is roll it out so it's nice and flat and about 1/4" to 1/2" thick. Then press a number of the dogs feet into it, let it dry like you would do with any clay tile or plate like this. Then fire it to about 1700 in my glass kiln. I've done this with clay before and it's worked pretty well to bisque fire the clay so it can be used as a mold. I use low fire clay but my Skutt kiln won't fire high enough to actually fire it fully. My kiln only fires up to 1800 although I've never gone higher than 1700 and then only a few times. After I've bisqued fired it I would take a sheet of clear the same size as the clay and lay it on top and fire it so it slumps down into the impressions. I could also try filling the impressions with frit and then lay a sheet on top so when I fired it it wold come out with the paws being 3D on top of the glass.

R&R 910 and Hydroperm are plaster material that is used to create castings for molds. They both work real well to create molds with.

On the Sculpey clay, I baked it in my oven. That's how it's made hard and permanent. You could use your kiln although the oven works well.

Haydo, that's a good story and yes, I can see why you wouldn't want to get rid of it. We are the same way with stuff like that.

by theanimallover
Lovely pictures! I bet your wife feels like royalty when she is being towed!
Yes, Bonnie had a very cute nose

That pictures shows her looking a bit pissy, I think she was bored of having her picture taken. She spent most of her life on the settee or on our bed.

I also have a skutt kiln, hotstart pro. Thanks for instructions. I think I'll ask to grab some clay next time I see the potty potters who live near me.

by Faye Malench
Karen, when we lost our Dixie Dawg last year I didn't have time to do anything of a personal nature, like imprint her paws. Later I took a double layer of pretty glass and cut the letters of her name in fiber-paper and kiln-carved her memorial. You could kiln-carve paw prints along with that. I siliconed the glass to a landscaping stone to position at her grave. It gave me something to contribute and I enjoyed the memories of her as I worked. Sorry for your loss.
All times are UTC-04:00
Page 1 of 1
Powered by phpBB® Forum Software © phpBB Limited
https://www.phpbb.com/